Thugs are large, brutish variants of Walkers. They are far larger than Walkers and tower over them. However, they emit a loud, low roar which alerts nearby zombies to the area, making them a sort of early warning system. They are far slower than Walkers, however, only capable of shambling around and are still just as susceptible to getting their limbs broken/cut off and their head is still a weak spot.

Thugs are physically larger and much tougher than most of the other zombie types. They exhibit increased muscle and bone growth, making them tower over their lesser brethren, but otherwise differ little visually from most Walkers and Infected. They are perpetually enraged and will roar periodically, giving away their position.

The Thug will return in Dead Island 2 and has already appeared in Dead Island: Retro Revenge, but unlike the previous games, they will be more fat then muscle. They seem to be smaller than those found on Banoi, but also seem to be faster.

Upon seeing a survivor, the Thug will emit a loud, low roar before shambling towards them. This roar not only tells the survivor that they have been spotted, but also alerts other zombies in the area. The Thug is slow and easy to avoid, but when it gets into combat it is a force to be reckoned with. The Thug is the heavy hitter of the zombies, capable of dealing out a lot of damage with a single punch, able to throw a survivor several meters onto their back and causing a lot of damage. If a Thug loses both their arms, it will remain undeterred and try to headbutt or bite the survivor instead. However, like Walkers, if it loses a leg it will be unable to move and will subsequently die. The Thugs on Palanai are slightly different, in that that they have a new attack where they will flail their arms around them three times while moving forwards at an increased pace, causing massive damage and knockback to anyone hit. It will then roar out in success.

Do not underestimate these enemies. While they are slow, lumbering and easy to manoeuvre around, getting hit even a few times can easily result in death. 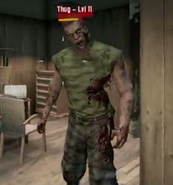 In the Resort area

During a cutscene (Resort)

In the Resort area

At the City Tunnel Gas Station

Ryder White facing off against a Thug at the Prison 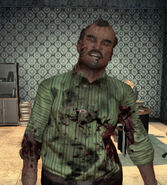 Todd Tanis as a thug in Big Daddy, Where Are You?

Thug in a Bungalow

Thug in a Dead Zone

Thug in the Jungle

The 'how to play' information on the Thug in Retro Revenge
Community content is available under CC-BY-SA unless otherwise noted.
Advertisement