Sam B is the first returning playable character featured in Dead Island: Epidemic.

“Sam B. was just a washed-up rapper before he learned he was immune to the deadly outbreak. Now he's found his place in the sun: the islands of Indonesia, where he's risen to fame as a protector of survivors from the relentless tides of infected. Sam B likes his killing up close and personal. He charges into combat and absorbs as much damage as he can to help allies.”
— Sam B's lore

Sam B likes his killing up close and personal. He charges into combat and absorbs as much damage as he can to help allies.

Charge toward target location, dealing area damage and pulling enemies towards you. Enemies in your path are knocked to the sides as you charge.

Enemies at the impact are stunned.

You and allies in the impact area gain a shield if there is an ally in the area.

Slam your hammer into the ground, causing a shockwave in front of you. The shockwave cripples and deals damage to enemies.

You have a chance to retaliate with a strong area attack when receiving damage. Activate to reduce damage dealt to you for the duration.

You cannot die while Grim Retaliation is active.

Play the song that made you great, taunting nearby enemies in the area, reduce incoming damage and have Grim Retaliation trigger each time you are hit even if you have not selected that skill. Not dispellable. You become immune to debuffs in this state.

Finish the beat by swinging your hammer around you. 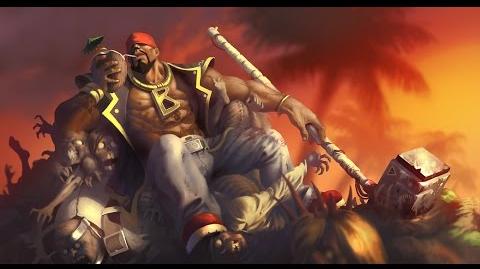 Sam B in Crib

Sam B in-game (open beta)
Add a photo to this gallery
Retrieved from "https://deadisland.fandom.com/wiki/Sam_B/Epidemic?oldid=77082"
Community content is available under CC-BY-SA unless otherwise noted.