Sam B, the Tank, is one of the four playable Heroes in Dead Island and one of five playable in Dead Island: Riptide He is a one-hit-wonder rap star of fading fame. Originally from New Orleans, he is now performing four nights a week at the Royal Palms Resort.

Sam B was booked by the Royal Palms Resort to perform his well-known song "Who Do You Voodoo" at a high profile hotel party. He gladly took the chance to play this gig.

Once strong, self-confident and proud, Sam B has had a troubled past and a history of drug and alcohol abuse, as his private life became caught in a haze of fake friends and bad advisers.

"I grew up in New Orleans. The Lower Ninth Ward. My Daddy went to prison when I was two. That's where he died. Angola. Momma didn't ever recover from that and drank and did crack and any other random motherfucker who didn't smack her round too bad. My nanna's the one who raised me. She ran a washeteria and we lived in a little shotgun house on Burgundy. From the time I was ten, man, I wanted to rap. I was into old school free-style rap and I'd be kicking ass at them battles, brah. But man, I just couldn't catch a break. Nothing caught on. So one Halloween, I came up with "Who Do You Voodoo, Bitch?" Just as a motherfucking joke, you know? It went right to the top of the hip hop charts. Like a motherfucking rocket! Suddenly, I was famous. Going to the Grammies. Hitting the parties. Man, I had bitches up the yin yang and for the first time in my life, I was making money. But shit, I was spending it as quick as I was getting it. I thought I had made it, you know what I'm saying? That the gravy train was never gonna end. So I did another song. And another song. And nothing hit. Nothing fucking hit. Song after song and ain't nobody gave a shit. It's been ten years man, and yeah, I can still get gigs, but all they want me to do is "Who Do You Voodoo, Bitch?" I used to play the big Casinos in Vegas or Atlantic City, but now it's just been Reno or Laughlin or some motherfucking cruise ship. So this gig here might be my last chance. There's some heavy Hollywood hitters up in here and if I get noticed, I could be right back on top there, you know what I'm saying?"

Sam is by far the toughest of the four characters, and the most capable of wading straight into groups of lesser enemies in melee combat. His specialization in blunt weapons which have very high Force attribute let him knock enemies around like bowling pins, as does his Rage ability. Don't get too confident with him though; he can still be brought down quickly by a large enough mob.

For most enemies the tactics are relatively similar, try to draw a couple off at a time so that you don't get surrounded and bash them flat. The one enemy that needs a very different tactic is gun-toting humans. Trying to charge one (and usually there are more than one at a time) is a bad idea; unless you are able to sneak up close to one without them noticing until it's too late, they will be able to put several shots into you before you get in range and they will occasionally backstep to try to avoid you. It's best to keep one good pistol on hand and try to shoot them in the head, which is almost always a one-hit kill. Look through the ironsights while doing this for better accuracy.

"For the longest time, there was nothing there. Nothing inside me. When I was young I had so much to say. So much to prove. Man, I had so much anger inside of me. I knew the whole motherfucking world was against me. But then I made some money and I didn't know what to say. And the money went away and still had nothing to fucking say. Well, I have something to say now. The world ain't so black and white no more. It's black and white and red all over, man. People do amazing shit when they up against it. The one's who think they're all that, the ones you think will stand their ground, they fucking run. And the quiet ones. The ones you don't even notice. Man, they don't give an inch. They'll give up everything for someone they don't even know. There's a song there somewhere. A song about something real. Shit, I don't even know if anyone's gonna be left when this is all done. But if they is… believe me, I got something to say." 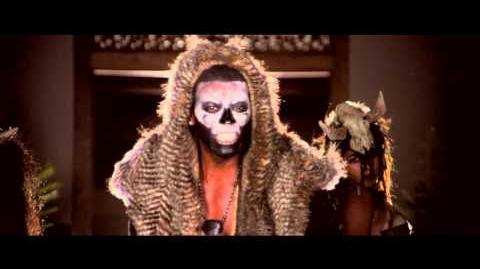 Sam B Feat. Chamillionaire - "No Room In Hell" *Uncut* 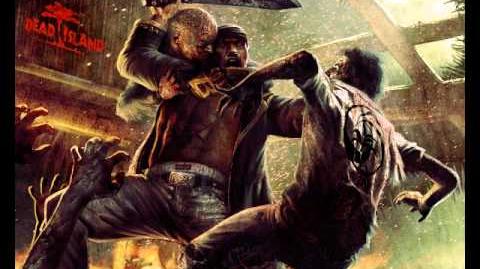 Sam B - Who Do You Voodoo, Bitch

Sam B with a hammer 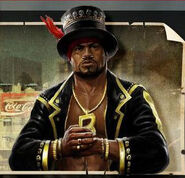 Sam B with his Voodoo Hat

Sam B overlooks the beach

Sam caught in a fight with a pack of zombies

Sam B attempts to save a survivor with a Molotov Cocktail

Sam B on stage

Sam B in Dead Island: Epidemic

Sam B as depicted in-game

Sam B on the cover of the mobile spin off game Dead Island: Survivors
Deutsch Español Português do Brasil
Community content is available under CC-BY-SA unless otherwise noted.
Advertisement