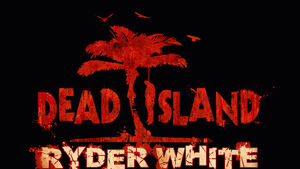 Ryder White's Campaign (also called Dead Island: Ryder White) is a downloadable content pack for Dead Island that was released on January 31, 2012 for PlayStation 3, Xbox 360 and Windows PC. It is available for 800 Microsoft points on Xbox LIVE Marketplace or for EUR 9,99 on PSN and Steam. Ryder White's Campaign focuses on Ryder White's role as a soldier to contain the infection in Banoi Island and his efforts to find a cure for his wife, Emily.

During the events prior to the game's main storyline, Ryder was interrogated to test his loyalty to his country by being presented with targets which he was asked if he would agree to kill without question (one of which was his wife, Emily White, which he agreed to reluctantly). Because he hesitated to kill his wife without question, Ryder was reassigned to Banoi in order to aid with containing the recent Infection outbreak. During the mission, Ryder and his squad on board of a helicopter were ordered to initiate a bombing run on the highway in the jungle. During their flight back to base, the copilot of the aircraft became infected and attacked the other pilot, forcing the craft to crash land in Moresby.

Ryder awakens from the crash several hours later to discover that he is the sole survivor. He is then contacted by the Banoi Island Defense Force and is instructed to regroup with B.I.D.F. Unit 4 stationed near Saint Christopher's Church, as the evacuation zone he requested pick up from has already departed. Ryder later arrives at the unit's location, only to discover that everyone has been killed by the local gang known as the Raskols and stripped of their weapons and equipment which included the explosive charges needed to destroy the City Bridge in Sector 4 (Old Town) in order to prevent the Infection from spreading any further.

He is then instructed by the B.I.D.F. to make his way to the Police Station in Sector 3 of the city in order to recover the explosives to complete Unit 4's mission. After fighting his way to the Police Station, Ryder is confronted by members of the gang who taunt him over the loss of his fellow soldiers. After a heated firefight, Ryder manages to kill the gang members and collects the stolen equipment before being instructed to proceed with finding and destroying the bridge. With most of the roadways blocked, Ryder climbs into a manhole that takes him to the sewers beneath Moresby in order to gain access to the riverside.

Upon exiting the sewers, Ryder's progress is again faltered by a group of Raskols that claim the City Bridge as their territory, leaving him with no other option but to kill more civilians which the B.I.D.F. intel allowed in order to ensure the mission's completion. With the gang members disposed of, Ryder proceeds with planting the charges on the bridge supports and demolishing the bridge. With the mission accomplished, the B.I.D.F. intel orders Ryder to make his way to the evacuation zone in Sector 6 (Gas Station). Ryder is then forced to confront several waves of zombies as he waits for the evac chopper to arrive.

While on board the chopper, Ryder contacts Emily telling her to prepare herself to be picked up. However, Emily replies, saying that she has been bitten by a patient and told Ryder to go on without her before making her tearful farewell to him. Unable to accept the loss of his wife, Ryder orders the pilot not to land on the aircraft carrier off the coast of the island and instead change course to the Prison in order to pick up his wife, disregarding her advice. The chopper then lands on the roof of the prison where Ryder frantically sprints his way inside to find Emily in hopes of not being too late.

When Ryder reaches Emily in the hospital wing of the prison, he finds her strapped to a bed, in the throes of the transformation into an infected. In broken speech, she tells him to leave her behind. Ryder then travels deeper into the prison in order to find Kevin. Upon finding him, he discovers that Kevin is actually the terrorist, Charon. Ryder is then left with no other choice but to collaborate with Charon in order to ensure his wife's life. Charon instructs Ryder to active the prison's emergency power in order to activate the complex's surveillance cameras which Charon will then use to guide Ryder. Once the power comes back online, Ryder is confronted by a groups of rebel prisoners who managed to obtain some firearms from the prison's armory. After fighting through numerous groups of prisoners, Ryder arrives at one of the other medical wards in the hospital where he finds an antibiotic to slow the effects of the Infection on Emily. Once Ryder obtains the drug, Charon informs him that the Heroes are on their way to the island with the antidote and that the antibiotic would slow down the effects of the Infection on Emily until they arrive.

After injecting Emily, Charon notifies him that a group of prisoners were approaching in retaliation for the ones that Ryder killed in order to obtain the Tetracycline. With the prisoners dead, Ryder travels to the control room in Block C and meets up with Charon. As Ryder approaches Charon, he discovers that Charon was behind the deaths of the scientists at the Laboratory but hides his suspicion. He is then instructed to clear the Infected from the shower room in Block C for when the Heroes arrive. With the shower room cleared, Ryder uses the sewers in order to return to the control. While eavesdropping on Charon's conversation with the Heroes, he discovers that Charon has been posing as him (the Voice). Out of rage, Ryder threatens to kill Charon for endangering Emily and making him betray his country. Charon then ensures him that the Heroes have the "antidote" and that the Heroes won't trust either Ryder or Charon if it is revealed that they were never actually speaking to Ryder. Charon then instructs Ryder to store knockout gas above the elevator lift that the Heroes will be using in order to steal the antidote from them to avoid having to make any negotiations. After placing the gas and returning to the control room, Charon and Ryder watch the Heroes pass out from the gas. Before leaving to retrieve the antidote, Ryder destroys the control room's computer in order to prevent Charon from pulling off more tricks. He then locks Charon in the control room and tells him that he's going to go get the antidote for Emily. Charon then replies to Ryder stating that the antidote is actually a vaccine, and it would only work on people that were in the early stages of Infection — while Emily was already past the first stages. Shaken by his words, Ryder runs off to get back to Emily in the intensive care unit. With Ryder gone, Charon reveals that he had a hidden backup key card and taunts him, stating that Ryder should have killed him when he had the chance.

Afraid of being too late, Ryder collects the antidote from the Heroes and frantically fights his way through countless waves of zombies to get back to Emily. Upon finding Emily, she has already become an Infected. Ryder then vows to make a complete antidote out of the serum and brings Emily to the roof where he discovers that Charon has turned the Heroes against him. Jin then releases Emily to attack Ryder, forcing him to kill her and Jin in retaliation. He then injects himself with the antidote, only to discover that the antidote is actually an enhanced version of the virus that transforms him into a powerful Special Infected. He is then killed by the Heroes. The Heroes get away on Ryder's chopper and it is revealed that Charon plans on using Yerema as Dr. West called, "a walking timebomb" to spread the infection.

Fighting in the Prison

Undead in the Prison

Ryder up against an irate Ram.
Add a photo to this gallery

Retrieved from "https://deadisland.fandom.com/wiki/Ryder_White%27s_Campaign?oldid=85335"
Community content is available under CC-BY-SA unless otherwise noted.