Rams are tough, strong and ferocious undead. The straight jacket they wear gives them mute testament to their insanity, and they relentlessly pursue any survivors they see, attacking with a single, ramming charge. Frontal attacks are ineffective against them; striking from behind is the best way to bring them down.

They charge at the player (their route is slightly more follow-the-target and may not be perfectly straight) and at close range, they kick and headbutt, knocking the player back and depleting their health and stamina.

The Ram is first encountered at Saint Christopher's Church, attempting to break down the barred doors along with several Walkers. This Ram has different behavior than others; it will not chase the target outside of the church's yard, and stops in the middle of a charge if that charge seems to lead it outside the church's yard.

The Ram is a hulking zombie who wears a straight jacket which permanently binds his arms to his chest, making it impossible for him to use them in combat. He also wears a prison-issue restraint mask which prevents him from biting and infecting others. The Ram is significantly larger than most zombies, including the Thug, and it is unclear how he was completely restrained in the straitjacket, pants and mask.

Rams are the most unique type of zombie encountered, as they have no usage of their arms. They tend to stay in one spot, though unlike Walkers who are content to just sit around and occasionally twitch, the Ram is one of the most vocal types of infected. They will often be found constantly writhing around in their straight jacket, trying to break free of their restraints. They will also constantly be huffing and making muffled sounds of rage from beneath their mask.

Upon spotting a survivor, they will turn to face them before squaring up. They will shake one last time, trying to break free, before roaring and charging forwards to tackle the victim. They have limited turning ability when changing, though they can adjust their aim around ten degrees left or right while charging, and they can run surprisingly fast for a zombie of their size. If a victim is hit, it will no doubt cause many broken bones, but also throw them several meters backwards through the air onto their back. The Ram will stop after a certain distance or if they hit an obstacle or wall, whereupon they will stumble backwards and spend around ten seconds angrily trying to break free of their restraints before once again turning and charging at the victim if they are still alive. If charging is not possible, they will instead lash out with a powerful kick, which will also cause a lot of damage and send the victim reeling backwards.

Ram charging at the player

A Ram charging Sam and Logan 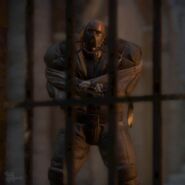 The weak spot on its back

A Ram in the Supermarket

Purna throwing a Molotov at one

The Ram charging at the player

A Ram in Dead Island Riptide 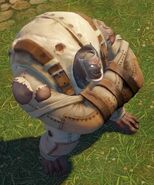 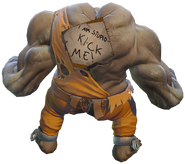 Kick Me sign on Massive Ram's back (Dead Island: Epidemic)

A Ram in Moresby

Русский
Community content is available under CC-BY-SA unless otherwise noted.