Infected most often spawn immobile in the environment, but will produce a shrill scream and sprint directly toward the player when in range, quickly closing the distance and striking with surprising force and speed. Infected swing their arms wildly while sprinting toward the player. Before Patch 1.3, their attack could interrupt the player's actions.

Infected are significantly faster than Walkers and Thugs, but have far less health. They can often be dispatched with one or two melee weapon attacks, especially when struck in the head. Infected are relatively dangerous, especially when dealing with more than one at a time, and should be fought with caution, as they can quickly deplete the player's health due to the speed with which they attack. They are also the only type of zombie capable of climbing. Second being the Butcher.

Infected are the most common type of zombie in the Ryder White's Campaign DLC. This is possibly due to the Outbreak on the Island was beginning and most people turned into the early stage of a Walker.

Infected have bloodshot eyes and small red lesions on their skin, but lack the gaping wounds and advanced decay that most Walkers exhibit. In fact, many of them still have intact clothing and what appear to be fresh bandages. In this way, Infected appear largely like a living human (indeed, many NPCs find themselves ambushed and mortally wounded because they cannot easily distinguish between the Infected and a survivor in need of rescue). They are distinguishable up close by their snarling demeanor and the skin worn off of their hands (most likely due to heavy clawing of doors, barricades, and survivors), exposing the muscle underneath. This suggests that Infected are humans undergoing the first stages of the zombification process and that, as the infection takes hold, they will eventually transform into Walkers — thus gaining the increased health (and drastically reduced speed, perhaps by means of rigor mortis). Therefore, as they have not been fully consumed by the infection, they have not suffered any decay to their body which would reduce their speed and mobility. In Escape Dead Island Infected are only seen mostly wearing Doctor Outfits from GeoPharm.

If observed from a distance without being detected, Infected walk around at a faster pace than Walkers, and with a noticeably different posture. They will occasionally snarl, and this too can be heard in advance of them detecting the player. However, Infected have a longer range of vision than Walkers, and so will frequently detect the player before the player spots them. Occasionally, they may also detect the player non-visually, but this is always script-triggered, initiated either by a quest event or by setting foot in a specific location.

Upon detecting the player, Infected pause to scream and then sprint to attack. They are impossible to outrun on foot (as they will follow the player even after their stamina is depleted) and have some limited climbing ability. They are also much faster at getting back to their feet than Walkers if knocked down.

Due to their speed, Infected can be difficult to keep track of in close combat, and many quest-related events feature points where multiple Infected will attack at once, sometimes from different directions. Also note that although wading through shallow standing water will slow the player down, Infected seem to be immune to this and have unchanged movement speed.

In the city of Moresby, Infected wearing helmets are randomly encountered - they have slightly higher health and damage resistance than normal Infected. Rarely, an Infected holding a basic melee weapon (pipes, wooden planks, knives or cleavers) can be encountered — this variety is especially dangerous, particularly if it's a cutting weapon, and if the Infected lands their full combo of melee attacks with the weapon, they can easily kill a high-level player with full health. Unlike Walkers, Infected holding a weapon do not throw them at the player.

In Dead Island: Riptide, there are several sub-types of Infected. These are:

An Infected attacked by a Mace

Concept art of how Infected turn into Walkers

Two Infected inside the Hotel in the Prologue

Male Infected in the Prison

"One is all I need" progress

"One is all I need" progress

A Female Infected in Henderson in Dead Island: Riptide

A female Infected in Resort

A male Infected in Resort

A female infected in the Resort

A female Infected on the Diamond Beach 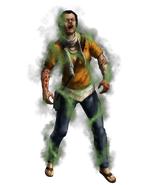 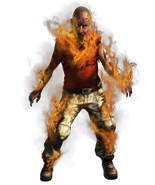 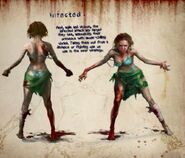 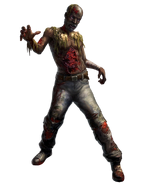 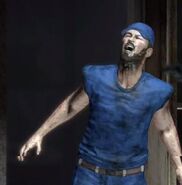 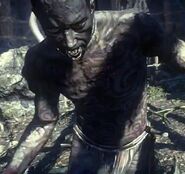 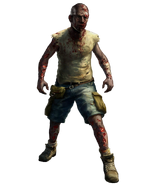 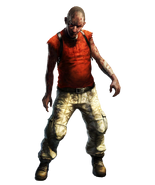 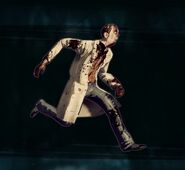