The Grenadier is a new type of zombie featured in Dead Island: Riptide. It is a mutated scientist that rips off chunks of its exposed bloated body and throws them at the Hero, which act as grenades. It is found in the greenhouse, along with mutated scientists, where Dr. Kessler resides.

The boils that he launches act as grenades, as they explode on contact and have corrosive, toxic effects on the Heroes. The grenades behave in a manner similar to Suicider explosions and make the same explosion sounds as well. Sometimes, when the Grenadier is killed, these boils may excrete this poisonous substance. Grenadiers are recognized by the gurgling sounds they make. There is a bug when he falls on the ground, causing his mask to clip inside his head.

They are only found in the lab, the Japanese Tunnels, the ferry station, and the Henderson military base.

It appears to be a zombie inside of a biohazard suit with a gas mask on, with an oxygen tank on its back. The left leg of the suit has been ripped off showing a bloody, bloated leg. What seems to be the remnants of a boot can be found on the lower part of its left leg.

It makes a gurgling-like sound, due to the mask that covers the mouth. It has boils that are exposed in a large portion of its body that keeps pulsating, even when dead. The mutation might be provoked by infection to the Kuru virus and exposure to the chemical agents found in the greenhouse.

Grenadier in the Flooded Jungle. 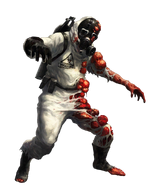 Grenadier Concept Art.
Add a photo to this gallery
Retrieved from "https://deadisland.fandom.com/wiki/Grenadier?oldid=81225"
Community content is available under CC-BY-SA unless otherwise noted.