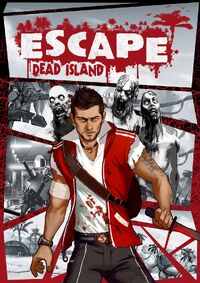 Escape Dead Island is a third-person mystery-action-adventure game developed by Fatshark and published by Deep Silver.

The game is set on the enigmatic island of Narapela, in the Banoi Archipelago six months after the start of the zombie outbreak of Dead Island. Escape explores the origins of the virus through the eyes of would-be documentarian Cliff Calo, who switches between fighting and stealth in a shifting world, brought to life with edgy, vibrant comic visuals.

6 months before the game's main events and at the start of the Zombie outbreak, a stealth operative named Rob sneaks into a Geo-Pham lab, finding it filled with infected staff. He banters with a woman playing a support role, it's revealed to be Xian Mei. Rob locates a scientist named Timmy who helped a man named Charon, responsible for the outbreak. Rob kills the scientist and downloads the data on the outbreak. As he goes to leave he hears a giant mutated creature nearby, possibly stalking him, he stashes the data in a bathroom and discovers the whole Island is overrun. Rob is never seen again.

Cliff Calo and his friends Linda, an energetic amateur reporter, and Devan, an intelligent graphic designer, go to Narapela which shares an Archipelago with Banoi to seek answers. While checking out the beach their boat, stolen from Cliff's dad, suddenly starts to sink. Cliff attempts to swim to save it, but seemingly almost drowns. He wakes up alone in a random shipping container on another part the Island. He leaves to find his friends discovering zombies have swarmed the island, he then finds a screwdriver for combat followed by a rope to get around. However, after appearing to be crushed by a falling shipping container, he awakens and revealed to have been recovering from drowning after going after the boat, but still has the rope and screwdriver. Linda is bitten by a bouncer after the group goes to look the story, Devan takes Linda back while Cliff carries on.

Cliff discovers Xian Mei trapped in a crashed small plane at a small airfield, after defending her from oncoming zombies, she frees herself and gives Cliff a pistol to cover her as she opens a door to the security station. It's revealed they need key cards from several places. During the collection process he discovers the Logs of Dr. Kimball, the Villa of the man behind Geo-Pharm's presence on the Archipelago, as well as the presence of the Butcher type of infected on the island.

Cliff secures the key cards, allowing him access to the Geo-Pharm labs. Despite entreaties from Devan to come to the docks and escape with him, Cliff proceeds inside to search for a cure for Linda. He suffers more hallucinations inside, but recovers Rob's data, which suggests the possibility of a cure. Deep within the labs, he finds Dr. Campbell working with Dr. Aaron Welles - who is now an enormous mutant, but still mostly in control of his faculties. Cliff shoots Welles, who chases him out of the facility while Campbell escapes.

Once outside the lab, Cliff proceeds to the docks, again suffering hallucinations, but he finds that Devan's boat has been wrecked and Devan is missing. Cliff realizes that Linda, to whom he was speaking over the radio, is simply a hallucinatory manifestation of his guilt and insecurities.

Cliff receives additional contact over his radio - from his father, who has come to the island in a helicopter to rescue him, and from Dr. Kimball, who claims to have Devan and to require Cliff's help to save him. Cliff proceeds to the helipad and entreats his father to wait for him to rescue Devan. It becomes clear that Cliff's father only desires the data Cliff recovered, and he leaves.

On his way to the villa to rescue Devan, Cliff finds Linda, who has succumbed to infection. He is forced to destroy her. He proceeds inside the villa, where he finds that the zombies have taken on a spectral quality that makes them difficult to identify. Dr. Kimball seems to understand what has happened, but does not elaborate. Cliff dodges Dr. Welles on his way to the upper level of the villa; along the way, he receives a final message from Xian Mei that the island's self-destruct system is about to be activated. On the upper level, Dr. Kimball provides him with a serum that she claims is the only hope for combating the virus.

Before Cliff can take the serum, he suffers one final, durable hallucination. Cliff meanders through a jungle and fights a zombified version of himself. It becomes apparent that his sanity, already cracked, is being stretched to the breaking point. The voice of Linda suggests to him that he is strapped to an operating table, as Devan appeared to be. Cliff leaves the jungle for a raised path of fractured ice or rock, where he faces increasing numbers of infected, including Linda again. At the last, he fights Dr. Welles himself and presumably kills him.

Cliff again finds the serum in front of him, as well as Devan's body. He apologizes, and administers the serum.

Cliff awakens on a beach at dawn in what appears to be the real world. Behind him, the villa explodes. Cliff places all of the documentation he acquired across the island into an emergency box and records a message for whoever finds it, claiming that by the time the box is found, he will be dead, undead, insane, or in another dimension. He pushes the box out to sea.

After six months of drifting, the box bounces against the hull of a boat. On the boat are Linda, Devan, and Cliff, on their way to uncover a story about zombies in the Banoi Archipelago - although Cliff's clothes are already damaged...

Retrieved from "https://deadisland.fandom.com/wiki/Escape_Dead_Island?oldid=81295"
Community content is available under CC-BY-SA unless otherwise noted.