"Black Hawk Down" is a medium quest given to the Hero by John Sinamoi in Dead Island.

Nikolai will lead them to a rock outcrop with Walkers below (loot the weapon chest he was sitting on before following him). If in single player he will jump down to fight them. In 4 person co-op he did not jump down until after all the Walkers were dispatched. After the Walkers a few Infected will be encountered. From there it's an uneventful trek.

Before doing this quest is an ideal time to turn in Brand Champagne obtained in the Hotel. This is especially true since once the Suicider reveal cutscene has occurred there will be Suiciders found in various places around the Resort. It is also an ideal time to complete any remaining side quests as the main quests after this will lead directly to Act 2 (though you can return to complete most of them once Act 2 has begun). 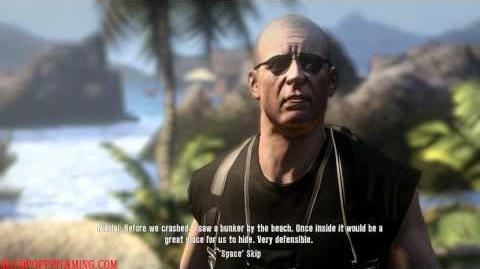 The helicopter spawns above the Hotel garage at the beginning of the game, as you are not meant to be up there yet
Add a photo to this gallery

Retrieved from "https://deadisland.fandom.com/wiki/Black_Hawk_Down?oldid=77767"
Community content is available under CC-BY-SA unless otherwise noted.