Ammunition in Dead Island and Dead Island: Riptide consists of different types of bullets to be fired from Firearms. Ammunition is rarely found since the game focuses more on hand-to-hand combat with melee weapons. Nevertheless, ammunition can be obtained when looting punks, looting boxes or other locations, and when the Hero crafts ammunition. To craft ammunition, the Hero must have the relevant blueprint.

Ammunition must fit the firearm in order to fire.

Eventually, the Heroes can acquire blueprint Mods or "recipes" to manufacture each type of ammunition at a Workbench, provided that the hero has the requisite materials and cash.

Special ammo is a different type of ammo introduced in Dead Island: Riptide for the new firearms added to the game. The ammo can't be crafted and is rare to find in the world. Instead, it is most commonly available from various merchants who will sell the different ammo types. Unlike regular ammo, special ammo encompasses all firearms that aren't usual bullet firearms, so special ammo is found under a different tab in the inventory screen and can sometimes be collected and reused if kept track of after firing. 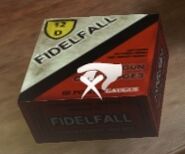 A collection of ammo on the mattress to the left
Community content is available under CC-BY-SA unless otherwise noted.
Advertisement